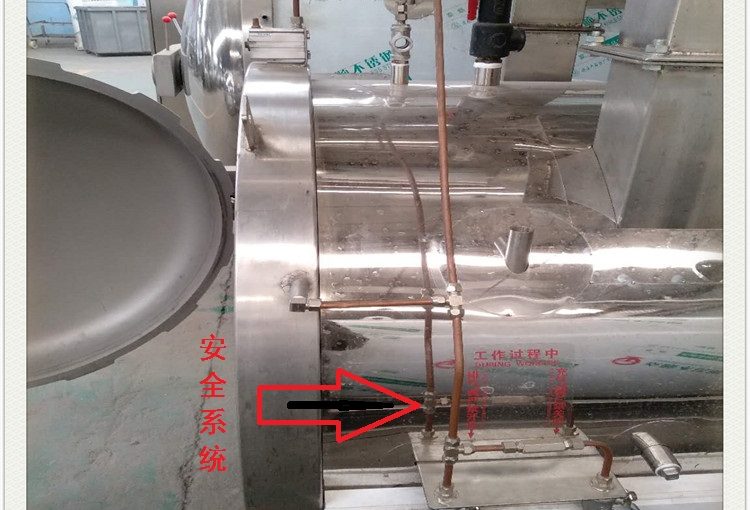 This is an analysis of the explosion accident of other plants. Our JOOYAN sterilizer is equipped with a safety interlock to avoid this kind of operation accident.

Buying using a sterilizer is safe in the first place

The retort machine is a high-pressure container, and the temperature is high. If it is used improperly, it will cause casualties. The following is a power outage causing the meter not to display the temperature. When the operator does not drop the internal pressure, the pot door is opened, the pressure drops suddenly, the sterilized amino acid bottle explodes, and the pot door is destroyed, causing a tragedy of one death and three injuries.

The JOOYAN sterilizing pot has a self-locking device for the pot door, and the pressure is not lowered to open the pot door. The sterilizer is equipped with a dual-sensor thermometer and a dual-mercury thermometer, so that even if the power is cut off, even if a watch is damaged, normal operation can be performed. It is equipped with JOOYAN safety automatic interlocking device, which can carry out safe and correct manual operation in case of water stop, power failure and gas stop, to ensure the safety of personnel equipment and the safety of sterilized articles.

The Nanning retort machine explosion accident has been going on for many years, and we must not forget and relax our vigilance.

The analysis of the accident report attached to the current year is as follows:

At 17:30 on August 19, 2004, an explosion accident occurred in a retort machine of Nanning City, Guangxi Nanning City Health Care Products Co., Ltd., causing 4 serious injuries on the spot, one of them died in hospital rescue, the other 3 to September On the 9th, they also died in the hospital, with a direct economic loss of 200,000 yuan.

On the afternoon of August 19, 2004, the company's location was blacked out, and the sterilizer electronic temperature meter could not be displayed, but the company still produces. A worker will put 15 Torr (35 bottles per bottle, 500 mL per bottle) of amino acid puree in a sterilizing pot. After sending steam for a period of time, you will hear a blasting sound in the pot, that is, close the steam valve to stop the steam supply. Three legal person representatives and other three people entered the site to view. The worker opens the drain valve and the exhaust valve, and discharges the high-pressure and high-temperature gas in the pot to achieve the purpose of decompression and pressure relief. In order to speed up the exhaust pressure relief and reduce the material loss, the worker unscrews the gap of the sterilizing pot door cover without causing the temperature and pressure inside the pot, causing steam to emanate. Three people were experiencing a steam explosion when they were viewing the pot, causing all four people present to be seriously injured and died afterwards.

Accident scene: The door of the sterilizing pot is opened by the airflow impact to the left side. The bolts on the upper part of the shaft and the simplified shaft are broken (there are no old cracks on the broken surface), and the fixing nut and the upper support bearing are off the ground. The lower part of the door cover that loses the support is connected to the ground, and the inner surface is inclined upwards and then opened. The opening of the retort machine is obliquely moved to the left side by 500m~, the whole rearward movement is 830mm, the steam inlet pipe is broken, and the sewage pipe is broken and pushed out of the wall. The left side of the rear elliptical head hits the back wall, and the wall with a thickness of 600mm is knocked out by a pit with a width of 700mm and a depth of 10Omm. The explosion shock wave damages many doors and windows in the workshop and adjacent workshops, and the ceiling falls and is placed. All the materials in the sterilizing pot are lost, and a lot of blood is left on the ground. The blood is traced within 20m of the exit aisle, and the blocky skin that has fallen off after burns is left.

(II) Analysis of the cause of the accident >

(1) In the case that the electronic temperature measuring instrument cannot display the temperature due to the power failure, the operator unscrews the door of the retort machine to form a steam explosion. Because the process time from the stop of steam supply and pressure relief to the opening of the door is short-lived, the glass bottle containing the amino acid puree has reached a high temperature state and is accompanied by vaporization pressure before the pressure is released, forming a pressurized container. The original amino acid slurry is in a superheated state to form a saturated liquid. Due to the rapid pressure relief, the pressure inside and outside the bottle is lost, causing the glass bottle to burst, and the saturated liquid in the vessel rapidly expands, causing a steam explosion. The high-temperature shock wave generated by the explosion and the remaining unvaporized high-temperature liquid and glass bottle fragments are sprayed along the outlet of the retort machine to form a force on the retort machine, and one person is killed and three people are injured.

(2) Since the electronic temperature measuring instrument cannot display the temperature due to power failure, the steam in the pot has overheating condition. When the lid is unscrewed, the superheated steam decompresses and expands to form a steam explosion characteristic, and also generates a force on the retort machine.

In the case that the electronic temperature measuring instrument cannot display the temperature due to power failure and the safety status is unknown, the company still produces the product in violation of regulations, which is the main cause of the accident.

4. Indirect reasons: Enterprise safety management is not implemented, and the safety system is not perfect, which is an indirect cause of accidents.

2. All types of production enterprises must conscientiously study and implement the relevant laws and regulations on production safety, and establish and improve the enterprise safety management mechanism.

4. The effective application of safety interlocks in the event of a power outage should be further studied.

JOOYAN sterilizer, all installed safety interlocks, see the picture below.