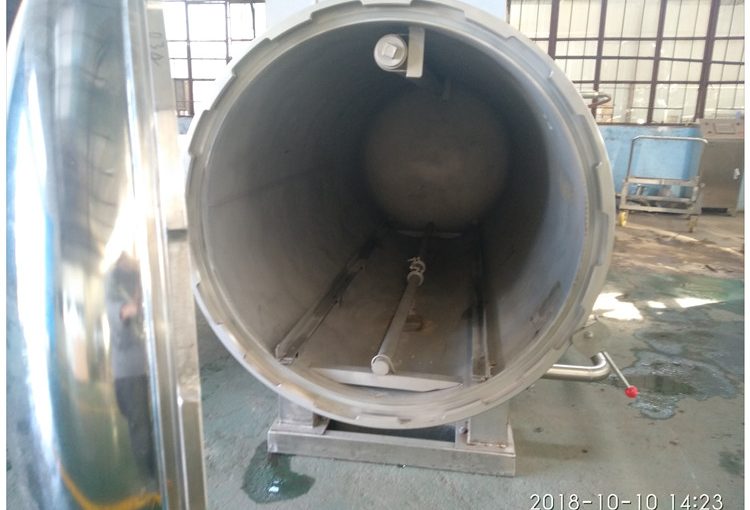 1. Pre-wet and immerse the prepared raw materials according to the specifications of the production requirements.

Second, bagging: Bagging with automatic bagging machine. This machine is a double-press bagging method for disc volume, which replaces the most heavy bagging and pressing process in the bagging operation.

3. Sterilize the culture bag that will be loaded with the material, and send it to the edible fungus with a sterilized turnover car. Most of them are steamed by atmospheric pressure sterilization. The edible fungus retort machine uses water to heat the steam to generate steam. The culture material is heated to 100 ° C for 8-14 hours to kill bacteria and mold in the edible fungus raw material. If the temperature reaches 126 ° C, the liquid culture material only needs 30-45 minutes to be sterilized thoroughly, solid culture It takes 2-4 hours. This retort machine sterilizes 5000 culture bags at a time.

The steps are as follows:

1. First, pull out the sterilization basket in the pot and load the items to be sterilized. Be careful not to pack too much, so as not to hinder the circulation of steam and affect the sterilization effect. Do not touch the barrel end of the conical flask and the end of the tube to prevent the condensate from drenching the paper at the mouth and penetrating into the tampon.

2. Push the sterilization basket into the retort machine and close the pot door.

3. Steam is introduced into the pot and the exhaust valve is opened at the same time to remove cold air from the pot. After the cold air is completely drained, close the exhaust valve so that the temperature inside the pot gradually increases as the steam pressure increases. When the pressure in the pot rises to the desired pressure, the heat source is controlled to maintain the pressure for the required time.

4. After the time required for sterilization has arrived, open the vent valve to allow the temperature inside the sterilizer to drop naturally, open the lid, and remove the sterilized items.

5. The sterilized medium taken out was placed in a 37 ° C incubator for 24 hours, and it was checked if no bacteria were grown.

1. Inoculation: After the sterilization is finished, it is inoculated after cooling. The inoculation room is purified by millions of air, and the operator should be inoculated according to strict aseptic operation.

V. After the mushroom is sprayed for 25 days, the good stick is moved into the constant temperature mushroom plant, where it can be controlled by environment such as temperature, light, ventilation, humidity, and co2 content. After 30 days, the mushroom can be collected.

6. Harvesting Industrialized production is only harvested at a rate of 300-350g per rod. After harvesting, the mushroom stick can be used to cultivate other varieties of edible fungi in addition to organic returning and fuel, such as: oyster mushroom, chicken leg mushroom and so on.

Edible mushroom factory production industry is an industry that determines the success or failure of details. The cultivation of bacteria, production process, environmental control, pollution prevention and other processes require high technology and rich experience. Among them, the prevention and control of miscellaneous bacteria is a very important link, which is why some edible fungi manufacturers have worse production quality. The number of bacteria in the environment is more and more, the sterilization is not complete, and the bacteria are difficult to control. The advantage of losing edible mushrooms.

The advantages of jooyan’s edible fungus retort machine are:

2. The cooling time is short, the bacteria package is cooled from 100 ° C to normal temperature in about 35 minutes; the production efficiency is greatly improved, and the retort machine is easily sterilized by multiple drops every day;

3. Completely sterilized, and the cooling is completed under a sealed vacuum state, and the survival rate of the bacteria is almost 0;

4. The cooling temperature is even, the temperature of each part of the bacteria package in the pot, the high temperature retort machine is kept in a uniform state;

6. The working process of vacuum cooling is actually a process of low-pressure puffing of a bacterial material. After the liquid material is vacuum-expanded, it can be better harvested for the growth of mycelium and fungal fruit bodies after inoculation. The nutrient content of the bacteria package provides conditions, that is, it can increase the yield of the mushroom (fruit body) and shorten the cycle of mushroom (grill growth). (About three days or so) 7. After the bacteria package is sterilized in the high-temperature retort machine, it can be directly cooled in the pot, thus avoiding the cross-contamination produced by the workers. At the same time, it also avoids the secondary pollution of suspended dust in the air in the traditional air-cooling mode;